I won't bore you with the same story you probably already read over at the $30 habit blog.

But, I do have a bit of a contrast for you to what I posted over there.  The hockey purchase at Wal Mart on Saturday was a discounted blaster of Panini Prizm.   This was a shocking find, because I almost never see any discounted blasters of current year's product at the box stores around here.  So this was an automatic snag. 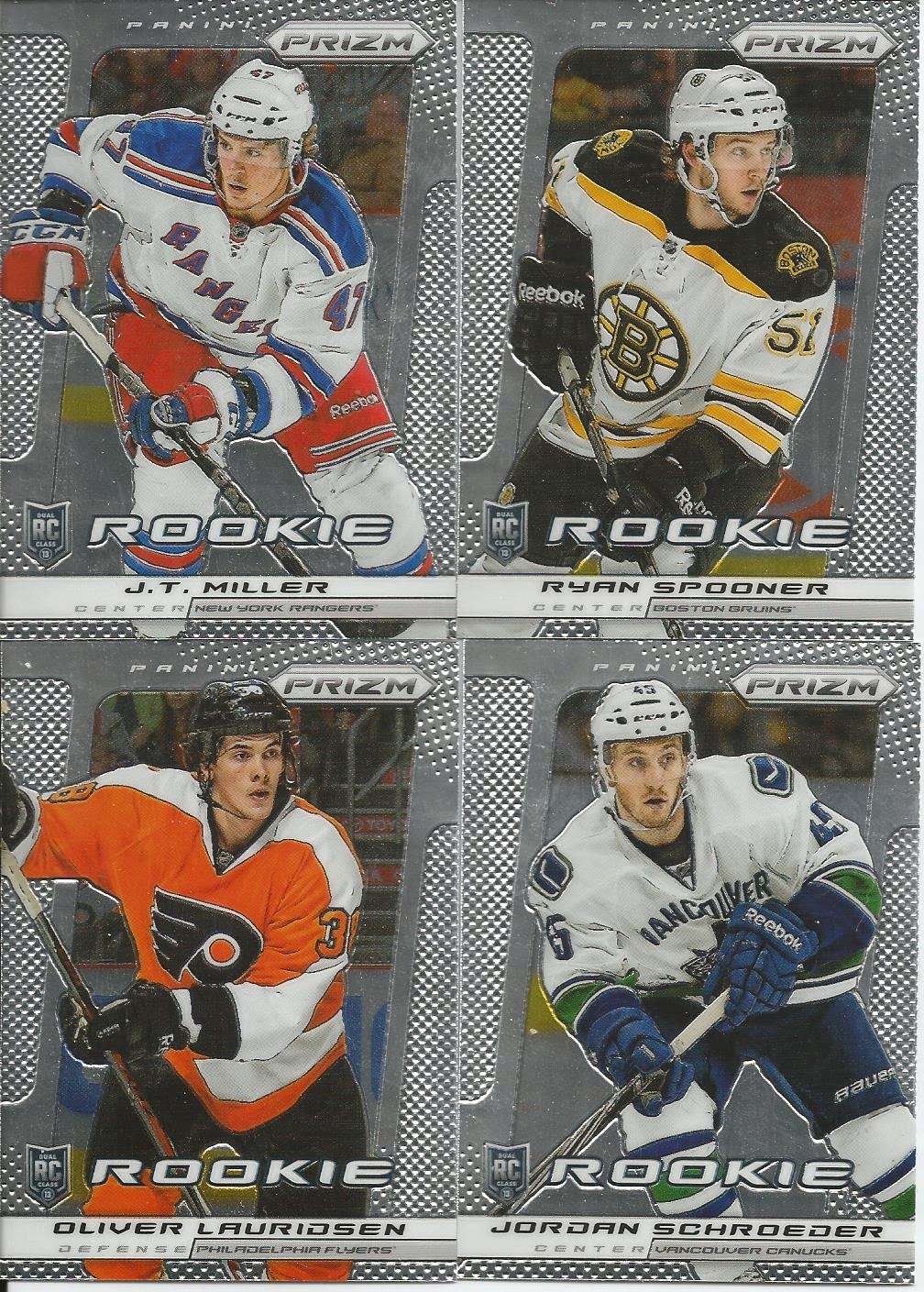 Now, I know 3 of these 4 guys (Schroeder being the only one I don't know anything about, yet).  To say I know them means that I've heard of them in passing during hockey shows that I watch during the season, both in the US and Canada.  So the familiarity in truth is small.

What really makes me wonder is this.   If I don't care for a product like Bowman baseball because of it's affinity for going heavy on prospects, why don't I have the same disdain for hockey products that include a lot of young players as well.

It doesn't make sense if you think about it.  Maybe it's because of the fact that I prefer hockey to baseball as a sport (1A vs 1B is really how they would be ranked).  It's weird, but true. 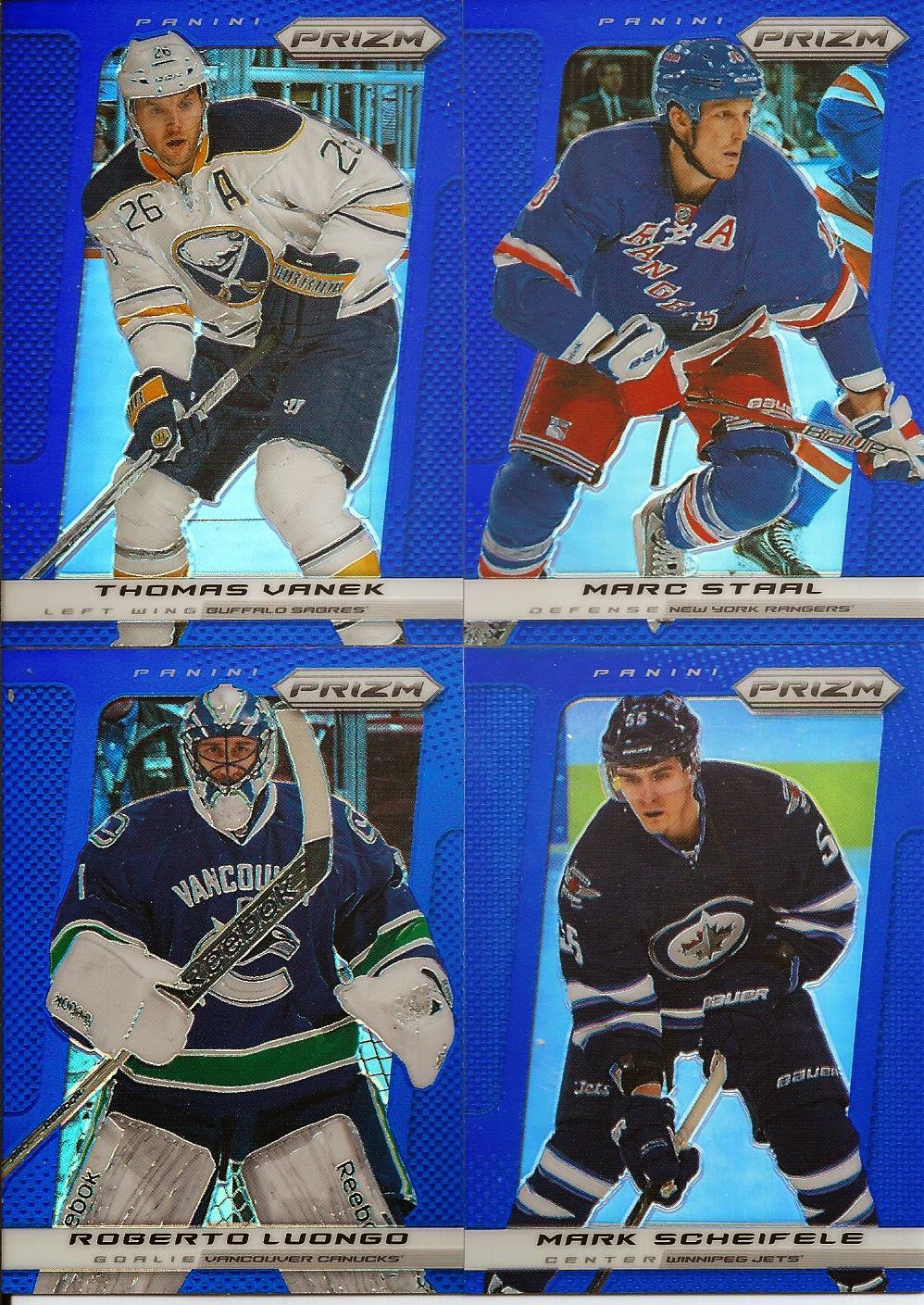 These dirty bastard blue parallels are still sucking me in.  Right now, they are my favorite parallel set from any of this years releases, in either sport.  It's going to be hard for me not to be sucked in to chasing these cards.   Very hard.

I also broke my streak of no hits in blasters, with a nice autograph of Sven Baertschi. 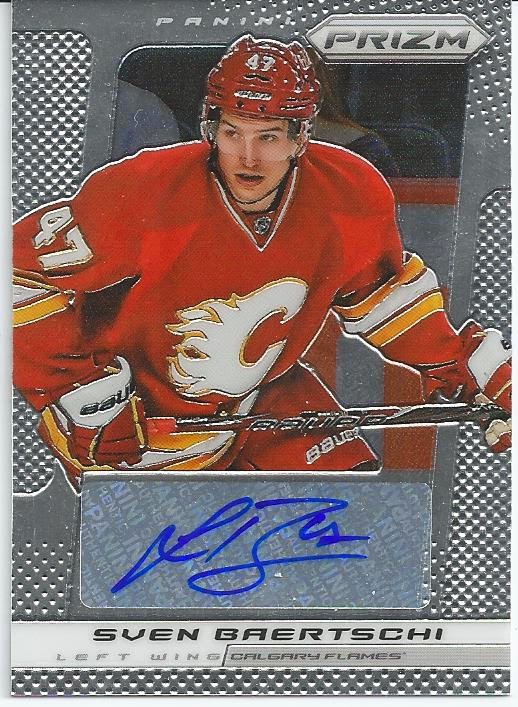 Sticker auto, what can you do?  The card still looks really great, and is the best pull out of a pack in quite a while.

Is anyone out there collecting Panini Prizm this year, hockey or baseball?  For me, it's really not a bad product, even though in my opinion it might be a little overpriced.  Would love to hear your thoughts.

Thanks for reading, Robert
Posted by Robert at 8:13 PM 1 comment:

Despite the red, I had to have this card

I am still considering the Robert Morris card show last weekend a success for myself, even though I wound up with limited time to peruse the aisles.

There was one table that was offering 75% off of relic cards, so I dove in to see if I could find anything worth bringing home.

Even though the swatches on this card were red, I just had to have this card. 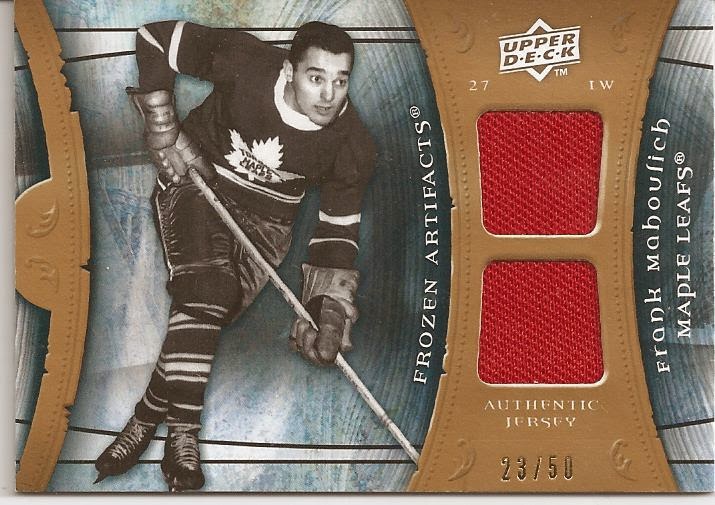 The Big M!!  Frank Mahovlich, one of the greatest Leafs of all time.  I love the look of the card, the picture is great, the script is a font that I enjoy reading, and it's limited to just 50 copies.

If I can find one of these with blue or white swatches, that would be even better.  None the less, this card becomes a nice piece of my Maple Leafs collection, which is something that I am hoping to grow a little bit more over the summer.

It's been a while since I've posted on this blog, but last night at the Robert Morris card show, I picked up a few reasons to start posting.

For $5, I picked up a card that should have been in my Joe Sakic collection for a long time, but for some reason has eluded me. 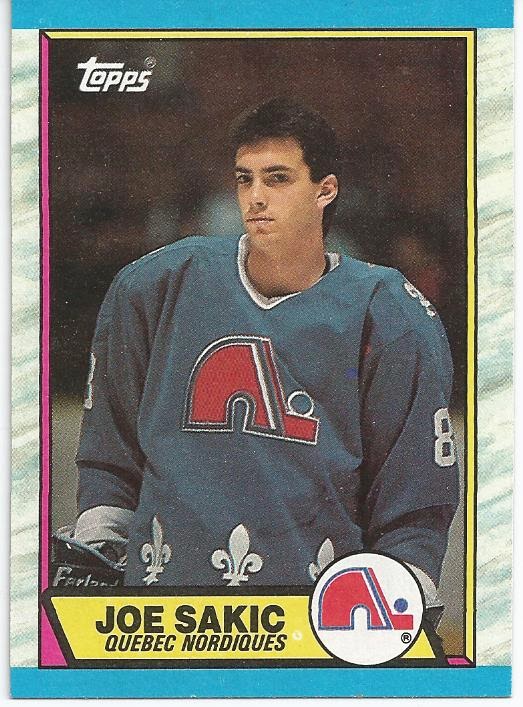 The Topps version of his RC.  Beautiful card, corners are great and it's well centered.

From the same table, I found another $5 card for my Sakic collection that also has escaped my clutches. 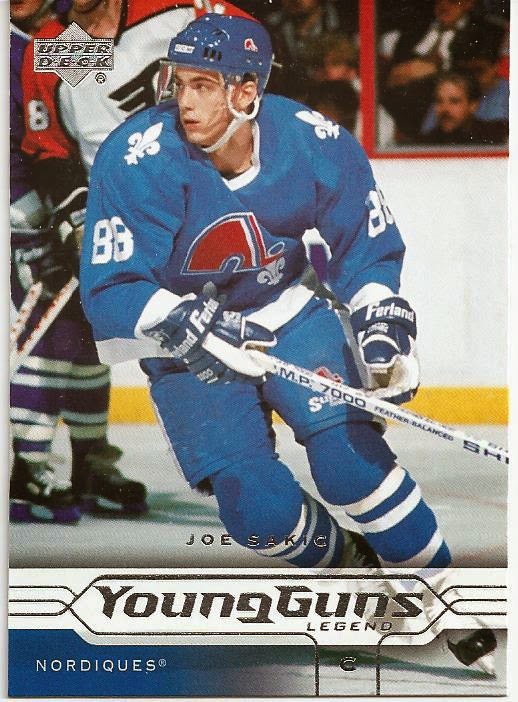 During the labor dispute of 2004-05, Upper Deck decided to use established stars, retired players and a couple of coaches for their short printed Young Guns subset.  For me, the photo is pretty cool because it features Joe during his rookie season with the Nordiques (the #88 on his jersey is the giveaway).

Still lots more to show from the show here, but I'll save those for future posts.

Thanks for reading, Robert
Posted by Robert at 9:26 AM 3 comments:

Simple.  That's what this card is.  Nothing fancy, like most of the Topps/OPC sets during the 1980's.  Maybe that's why I really like this card.


Even the back of the card is simple and easy to read. 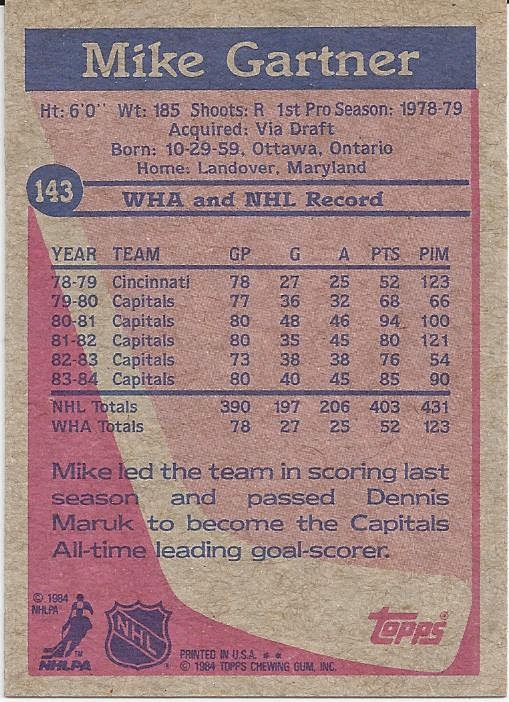 Gartner is probably one of the most under appreciated goal scorers of my lifetime.   708 goals during 19 seasons in the NHL, 6th all time.  27 more as a 19 year old in the WHA with the Cincinnati Stingers (one of the greatest WHA logos in my opinion).   Mike scored 40 or more goals 9 times.  Add another 8 seasons of 30-39 goals.   Probably one of the most dependable offensive threats during the 80's and early 90's.

Why no hobby love for this guy?  Probably because he never won any hardware.   No scoring titles.  No Stanley Cups.  Never made a 1st or 2nd all star team.  All he did was consistently show up and put pucks in the back of the net.

I remember picking this card up at a show in Canton, OH a few months back for 50 cents and thinking that it was a pretty good deal.  Maybe one day people will figure out how good this guy really was and his prices will climb.

Or, if people haven't figured it out by now, maybe they never will....

I took a look through the 2nd half of a Sportlots purchase I had made last weekend, and among the hockey cards that were in the lot was this one.


A baby faced 19 year old Joe Thornton, then with the Boston Bruins.  I made me immediately think of the disaster that was the San Jose first round exit this year at the hands of the San Jose Sharks.

I heard the GM say that the coaching staff shouldn't take the fall for the demise of the team in the playoffs.  Interesting.

This team has been built to win for quite a while now.  They've made it to the 3rd round of the playoffs just one time in the past decade.  Every other season has been 1st or 2nd round exits.

With a team loaded with talent like this, you have to wonder when the proverbial "axe" is going to fall.   It doesn't appear that management feels the need to shake up the club.   It's going to be an interesting summer in San Jose, because I believe a shake up is needed, only the difficult part is where do you begin?

Posted by Robert at 1:09 PM No comments: